Our long awaited competition to #CrushALZ kicked-off just over 30 hrs ago, right after The Crowd & The Cloud series premiere on April 6, and since then it has already broken all Stall Catchers records!

As promised, we are going to report daily roundups of the team competition results, featuring the most active teams & reporting on progress towards the research goal. 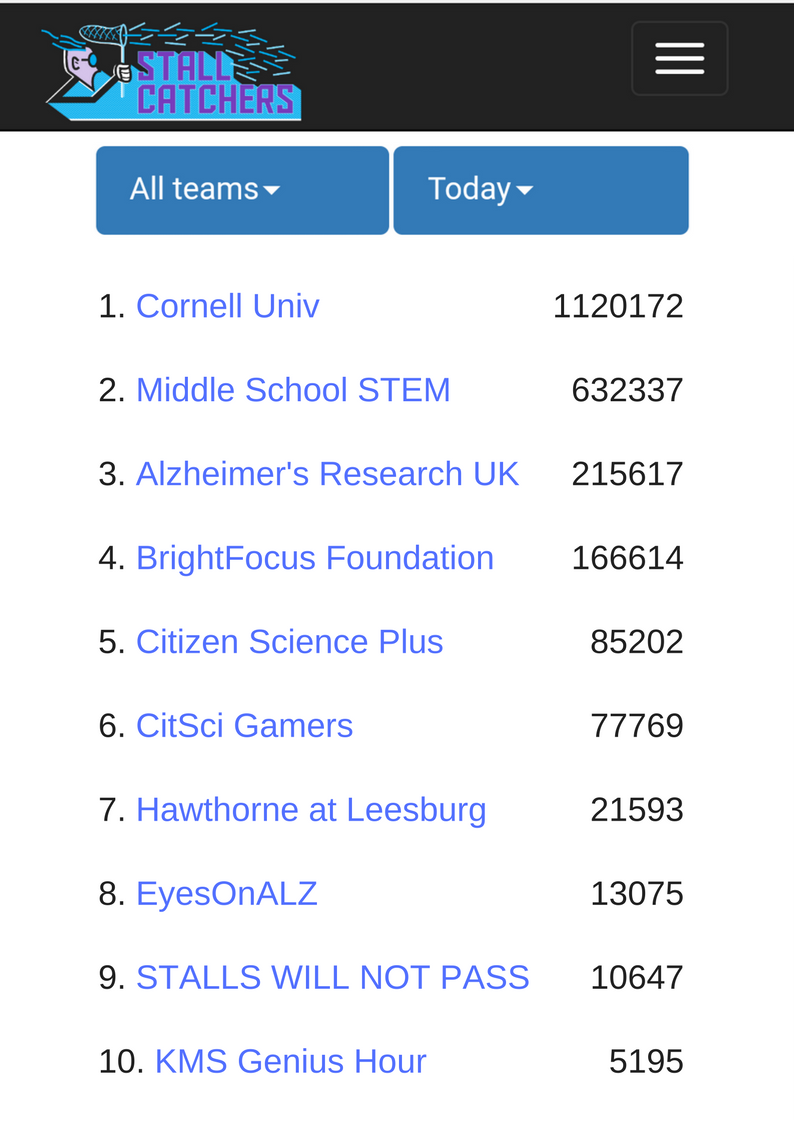 ==**Day 1 winners** (at 5pm ET, April 7) were **[Cornell Univ](http://stallcatchers.com/team/6)**!== The team is owned by our biomedical experts at the Schaffer-Nishimura lab where the science behind Stall Catchers happens & open to everyone from Cornell campus.

We'll see how long it takes for the Crowd to overtake them (I am guessing not very long! 😈)

Case in point might be the team right behind them, Middle School STEM! We're also happy to see our colleagues Alzheimer's Research UK in third place there, closely followed by our sponsors, the BrightFocus Foundation who seem to have formed a competitive team of catchers! :) Citizen Science Plus - a group at University of Salzburg, and CitSciGamers (yay for citizen science gamers!!!) are following closely behind.

Don't forget you can join any of these teams or create your own on Stall Catchers! Full instructions here.

* **The largest team: Middle School STEM!** One of the teams has a ==whopping - 116 - members==!!! That's an impressive number, especially considering the next team has only 10. Keep going Middle Schoolers! If you'd like to join their team, just follow this link: http://bit.ly/MidSchoolSTEM

Congratulations everyone, and good luck on Day 2!

Day 2 of our month-long competition to #CrushALZ on Stall Catchers has concluded, and here are the results! Don't forget it's not too late to join & help us #CrushALZ

How to join a team: Login or Register on Stall Catchers Your current team - Team Humanity - is displayed on the left of the main (analysis) page Click "Choose team" right below the team name and you'll be taken to the