The first Stall Catchers team competition - #CrushALZ has come to an end!

We have been amazed by the number of teams who joined & the impressive number of catchers they were able to recruit: at the end of #CrushALZ we had 29 teams with 456 catchers. And the total number of Stall Catchers players have now reached 4 728 !!!

Our largest team - Middle School STEM - have been leading the competition for most of the month, and finally crushed their competitors last night with over 90 million total points!!!

The full report of the final day of #CrushALZ is below, including the Top 10 teams of the competition, the most active players of CitSciDay and teams who rocked the most on the last day!

Join us on a #CrowdCloudLIVE hangout on Wednesday, featuring a live panel of our most dedicated catchers, leaders of the winning teams and the people behind the game!

The hangout will be hosted by [The Crowd & The Cloud](http://crowdandcloud.org/) PBS documentary team on their [Facebook page](https://www.facebook.com/crowdandcloudTV/) from 8pm ET, Wednesday, May 10. More details to be announced on our blog soon!

Don't worry though! The end of #CrushALZ competition is not the end of Stall Catchers 😄 The teams will stay an active feature of the game, and we have a number of new things planned for the future! See the full "What's next?" post to learn all about it.

Equivalent lab time: up to 32.3 weeks

1️⃣ **[Middle School STEM](http://stallcatchers.com/team/4)** - a team of middle school students & staff at the Lake Hazel Middle School, which - and we have inside info here - have been obsessed with Stall Catchers, and crushed so hard in the last two days of the competition, that no other team was finally able to catch up to them!!

We will be featuring the winning team on our blog in detail very soon, and the team leader - Ms. Davis who set up the team and recruited her students, will be on the live panel on #CrowdCloudLIVE on Wednesday! Tune in to ask Middle School STEM what is their winning secret!!

2️⃣ Our long time leaders, and the team that has risen the fastest, despite having only 10 catchers - Stall Destroyers - took the second place with over 20 million points !!!

3️⃣ CitSciGamers, who have also won quite a few daily victories during the last 30 days and have led the competition for a little while, took the third place!!

5️⃣ EyeWirers who had joined just two weeks ago took the fifth!

6️⃣ STALLS WILL NOT PASS ended proudly in sixth place!

Final Result: STALLS WILL NOT PASS got into 6th place.#crushalz challenge pic.twitter.com/caucH9STw0

7️⃣ Alzheimer's Research UK who have been one of the most active teams from the first day of the competition took the seventh place!

8️⃣ Cornell Univ - a team of our biomedical collaborators at Cornell University - snatched the 8th place from KMS Genius Hour during the last minutes of the competition!!!

🔟 Citizen Science Plus at the University of Salzburg have filled the last - tenth position on the winner leaderboard!!

We salute ALL the winning teams!! 🙌

The #CrowdCloudLIVE panel on on Wednesday will also be joined by other active catchers of these teams and the Team Humanity, including: justacea, gcalkins, caprarom & kcoralee. Tune in to ask them how they did so well!!

We chose to dedicate the last day of the competition to the Global Citizen Science Day 2017, and gave double points to everyone who were catching on the day!

We'd like to give a special shout-out to the most active catchers during this time. Here they are: 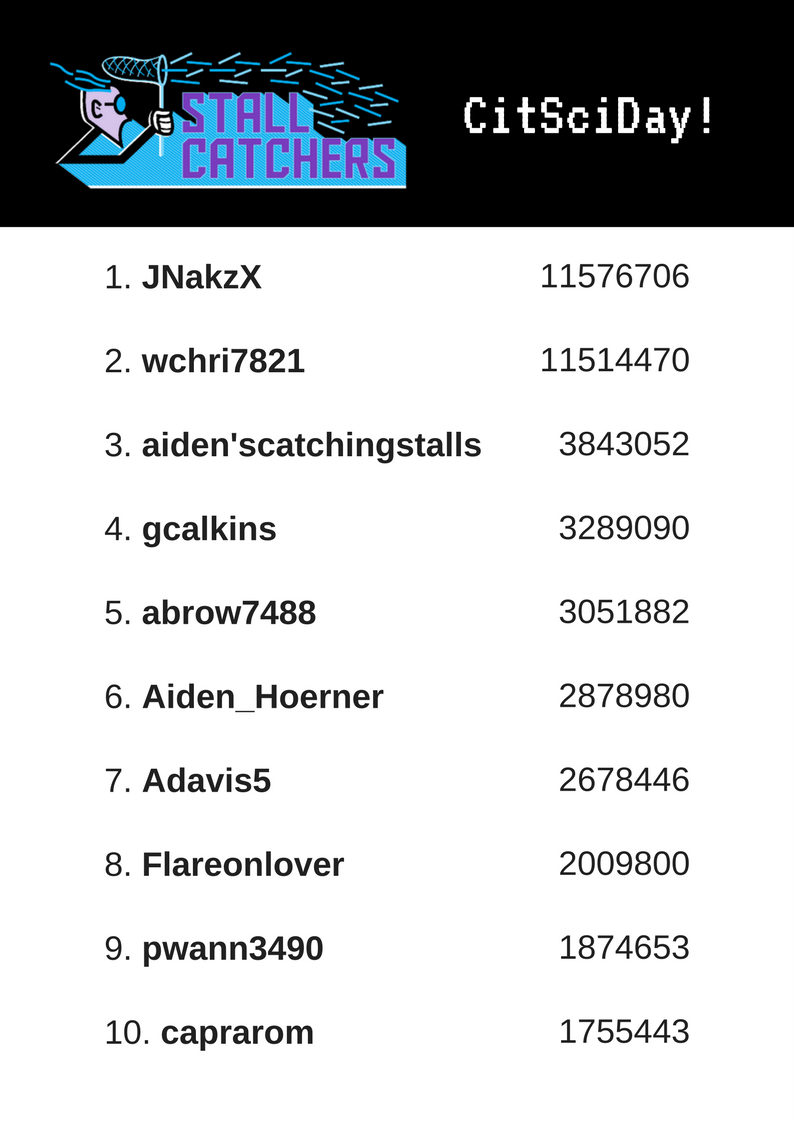 These teams rocked the most during the last day 🤘:

Besides the teams who got into the final Top 10, Hawthorne at Leesburg retirement community team, ALZ Bees and Purple Canoe Clun - a group of Alzheimer's Disease care receivers and their care givers, have contributed significantly to the #CrushALZ last day!

The last hour of #CrushALZ was streamed live!

Catch up on the hour of science & #CrushALZ recap with Pietro Michelucci & Chris Schaffer here:

THANK YOU EVERYONE for making our first team competiton such a great success! 🤗

Don't forget to tune in to #CrowdCloudLIVE on Wednesday when we crown the winners! 🎥

On Wednesday The Crowd & The Cloud* are hosting a very special #CrowdCloudLIVE hangout, which will highlight the #CrushALZ competition and include a live panel of Stall Catchers players and

With over 90 million points !!! And the most active catchers on the last day have been: Look for the full coverage on the winners & the full report of Day