September is World Alzheimer's Month - aimed at raising awareness of this disease worldwide & encourage the search for a cure.

We have a record number of events planned for the entire month, including an Austrian catchathon on World Alzheimer's Day (21/9)! More details below & in the coming weeks, but first and foremost... We're running a competition on social media for all our followers & dedicated stall catchers!

World Alzheimer's Month invites everyone to talk about & act to fight dementia, and show it off to the world. We invite you to do the same!

Play Stall Catchers throughout the month, and take photos & videos as evidence! Post them on social media with the hashtags #WorldAlzMonth & #StallCatchers (or send them to us) and invite friends to like & share them! 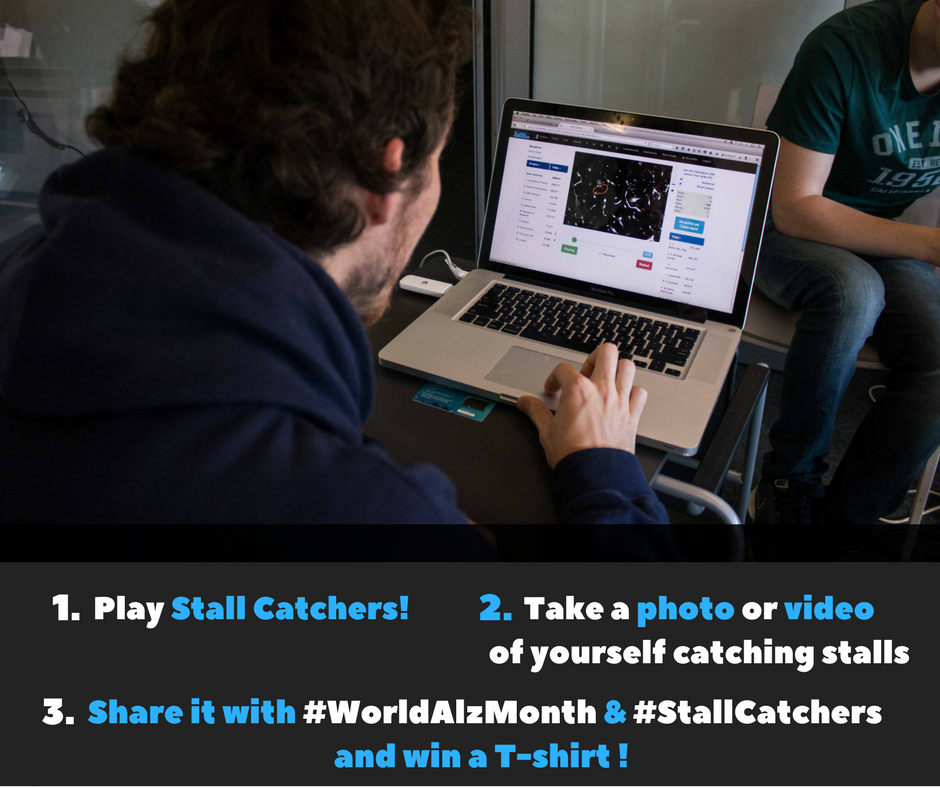 At the end of the month, we'll select the catchers with the most likes & shares on their catching posts - that catcher will win a super cool Stall Catchers T-shirt!

What are you waiting for?! 😜 head to Stall Catchers & snap some good catching moments right now!

Stall Catchers events to look for in September

8/9 - British Science Festival: we'll have a Stall Catchers booth at the Brighton Palace Pier (Brighton, UK), from 5pm GMT on Friday, 8th September. Pop by if you're in or around town, and if not - look for photos and live streams! More info in this Facebook event.

9/9 - El Salvador Catchathon: ASOCIACIÓN DE FAMILIARES ALZHEIMER DE EL SALVADOR are running their own catchathon on the day, likely a competition between teams at San Miguel and San Salvador! According to the organizers, El Salvador is "quite a competitive country", so we'll see how many stalls they can catch!

12/9 - Live interview at Science Soup TV: our lead Pietro will appear live on the Science Soup TV - "Mokslo sriuba" science popularization show in Lithuania. Look for it at 4:30pm GMT on 12th September, on this YouTube channel.

16-17/9 - GameOn Expo: we'll have a Stall Catchers booth at the biggest game expo in the Baltics (Vilnius, Lithuania)! Join us if you're in or around town during the weekend of 16-17th September. We'll share lots of pics, videos & live streams throughout the weekend too!

21/9 - Austrian Catchathon: another catchathon, and right on World Alzheimer's Day, aka Alzheimer's Action Day! Organized by the Ludwig Boltzmann Gesellschaft, and to be joined by our own Pietro Michelucci. Check out their cool invite:

Are you catching stalls from #Austria? Well check this out - there's an Austrian #Catchathon on the way! Organized by the Reden Sie mit of the Ludwig Boltzmann Gesellschaft. Did you know that there's approximately 100 000 people affected by Alzheimer's in Austria alone? We need your help!💪 Alzheimer’s research needs new ideas-your ideas!💜 #CitizenScience #StallCatchers #EyesOnALZ #Alzheimers #CrushALZ #citsci #WorldAlzMonth #stalls #help #research #science #catching

Brace for a month full of catching - let's shake the world with the fight against Alzheimer's!

There is an approaching wave of people living with dementia. Within the next 35 years, dementia incidence rates will double worldwide (Dolgi, Nature, 2016). While this trend has been observed

Yes, we have more to offer than Mozart, Arnold Schwarzenegger and “The Sound of Music”! We are happy to announce an Austrian Catchathon to support Alzheimer's research. After the great