We've been a little busy working behind the scenes during the last couple of weeks & have lots to report !

First and foremost, our team has met again at Cornell University (Ithaca, NY) to discuss short & long term goals and hang out (don't judge - this was only our second live meeting ever, as we are all spread out in different parts of the world! 😊 )

We had a chance to sit down again with our biomedical collaborators at the Schaffer-Nishimura Lab: Chris, Nozomi & Mohammad, as well as a new member joining our team - Jennifer Fee from Cornell Lab of Ornithology (an organization with a looong history of citizen science), who is to be our curriculum advisor!

We were also discussing some outreach activities we could do until & over the summer, which was when Chris & Nozomi shared a super cool experiment to demonstrate stalls in class (or DIY) ! Here it is:

Punching a hole in leaf vein mimics a stall, and the effect of it to downstream veins can be seen by using fluorescent (or simple) die ! Pretty cool, ha ?! (Note that it works differently for different types of leaves - which one do you think resembles our brain more?!)

Following the meeting with the lab, and some more (intensive!) planning meetings with the core team, we set off to Twin Cities (Minneapolis/St Paul) in Minnesota !! There we joined the Citizen Science Association conference 2017, where many of our friends, including folks from SciStarter, The Crowd & The Cloud crew, Mark2Cure project team & many more were participating!

What can beat an opening reception w a dinosaur?! (And good food and great people)! Thanks @sciencemuseummn! #CitSci2017 pic.twitter.com/mrBfgZJYkt

We were reporting our adventures during the conference via Twitter mainly, and here is a storified version for a quick (or not so quick ... 😬) overview: https://storify.com/EyesOnALZ/stall-catchers-at-citsci2017

Most importantly, Pietro presented the new crowd science brewing at Stall Catchers, which will allow us to improve the analytic efficiency of Stall Catchers several times! Here's the recording of his talk (and YOU - yes, all of our "Team Humanity" is in there too!):

We'll be telling you more about our new dynamic methods soon too. They are going to give you catchers even more super powers! 😊 Or, to put it simply, we'll be able to determine a reliable "crowd answer" for any one vessel by collecting much fewer annotations than we do now, which will make sure we can analyse more data in the same time & speed up Alzheimer's research even further! Still quite a bit of testing to do before we fully implement them, but this is super exciting!

The conference also gaves us a chance to meet with the "extended" EyesOnALZ team, including our advisors Darlene Cavalier (SciStarter) and Anne Bowser (Wilson Center), and our forum/outreach advisor Alice (@PenguinGalaxy) ! We had a chance to dwell more into the planning of curriculum/educational feature development for Stall Catchers, as it is all we can think about it seems, ever since Middle School STEM team from Lake Hazel Middle School recently took Stall Catchers by the storm! 😛

We got loads of support for the idea from other participants at the conference too (and plenty of people volunteered to help us in one way or another, for which we are very thankful!), so we are really quite inspired now !!! Stay tuned for further developments of course 😊

At the conference, we also had a chance to hang out with some other biomedical project owners, including the crew at Mark2Cure - a citizen science project focusing on rare disease, Cochrane Crowd, focusing on categorising and summarising healthcare evidence and others. We also had a chance to chat & strategize with CitSciBio - a biomedical citizen science hub. They also took us in during the Citizen Science Public Festival at the Science Museum (part of the conference "closing" events), where we "dropped" some stickers and did an impromptu Stall Catchers demo 😊

AND there was the screening of The Crowd & The Cloud at the closing event, including the Alzheimer's segment in which EyesOnALZ & Stall Catchers are featured. Pietro was also asked to say a few words, thanking our Team Humanity - ALL YOU GUYS in it too 😊 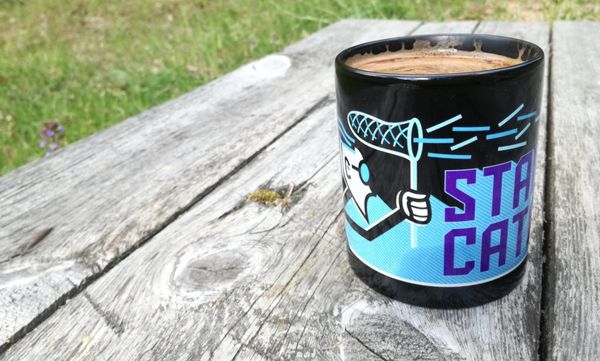 Finally! The day is almost here... If you're a stall catcher, you will be able to redeem your well deserved points starting Monday! What's "redeem"? You might have

Things we saw, things we told, people we met ! See Pietro's talk on Stall Catchers in page 2 of the Storify... [View the story "EyesOnALZ at #CitSci2017" on Storify]