Time flies when you're having fun, and we have already completed the fifth day of the #CrushALZ competition in Stall Catchers!

We are steadily pushing towards the research goal - steadily, but not fast enough! :) More eyes on the prize still needed, so keep spreading the word the best you can! :)

Help us answer an important research question about the spatial relationship of stalls & amyloid plaques in Alzheimer's by JOINING STALL CATCHERS **NOW** & INVITING OTHERS! Instructions here.

Results of Day 5 are summarized below: 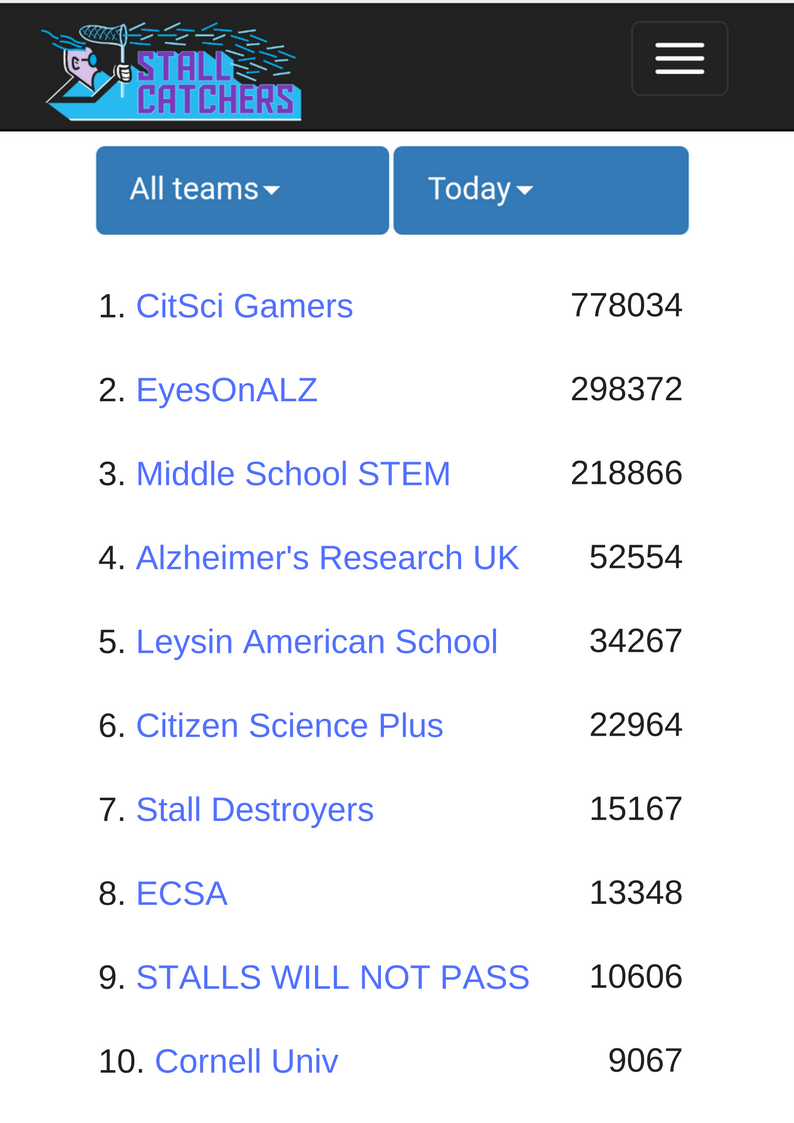 CitSciGamers maintained their LEADER POSITION third day in a row, collecting over twice as any points as yesterday! Meanwhile, EyesOnALZ finally won the race for second place leaving Middle School STEM behind in third.

AND this was not the only new team on the leaderboard! Stall Destroyers (nice name!! 😈) made it to 7 place, right after Citizen Science Plus in sixth.

Stall Destroyers have a rather inspiring description too, check it out:
Join the team that is going to make the difference in the Alzheimer's research. Become a stall destroyer. Your life will be better because of it. Join them by following this link.

Teams could use new members!

We are very happy that there are new teams emerging, and all teams growing on Stall Catchers, but the smaller ones could use some support! If you haven't joined them yet - YOU CAN DO SO NOW!

To join a team on Stall Catchers, navigate to the Teams (beta) & select the one you like! 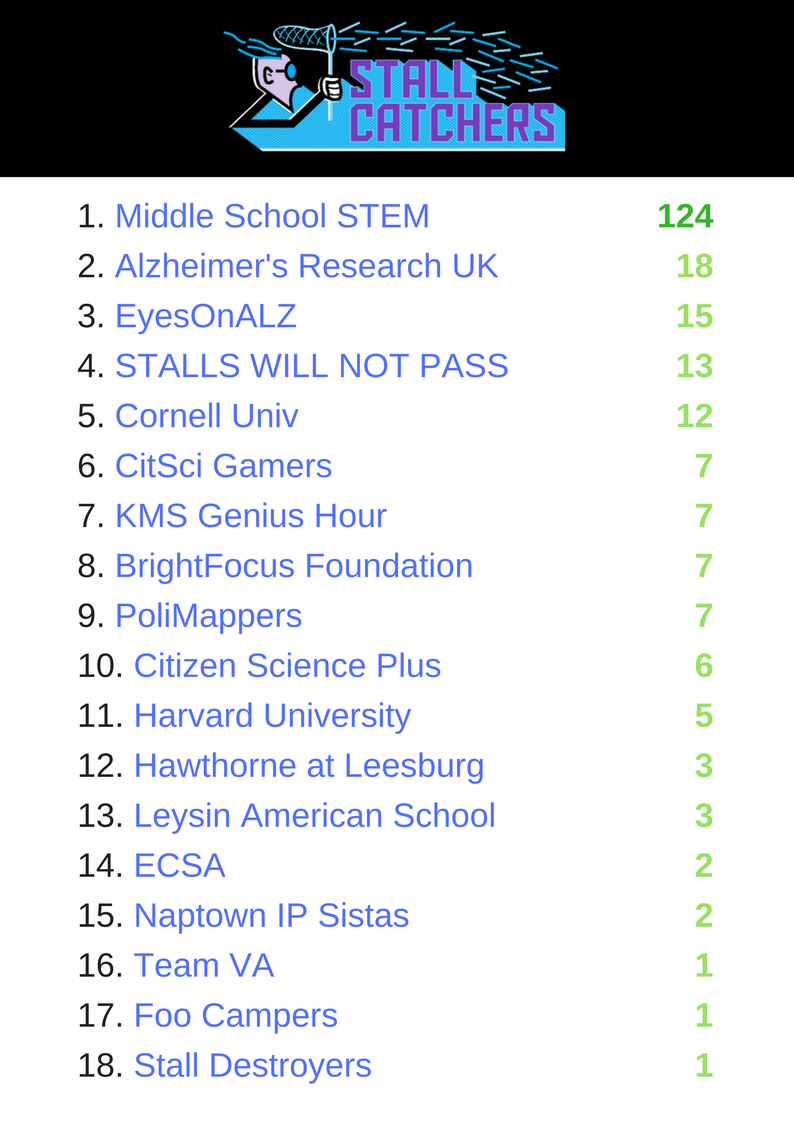 As you can see, Middle School STEM are still the absolute leaders in team size with 124 members! No other team compares to it, with Alzheimer's Research UK being next with 18 members - thanks so much to our colleagues at www.alzheimersresearchuk.org for promoting the #CrushALZ competition in their community.

Middle School STEM are still in the "All time" lead! However, Cornell Univ have now been pushed to third place by CitSciGamers who made it to second - not surprising, seeing the amount of points they score every day! 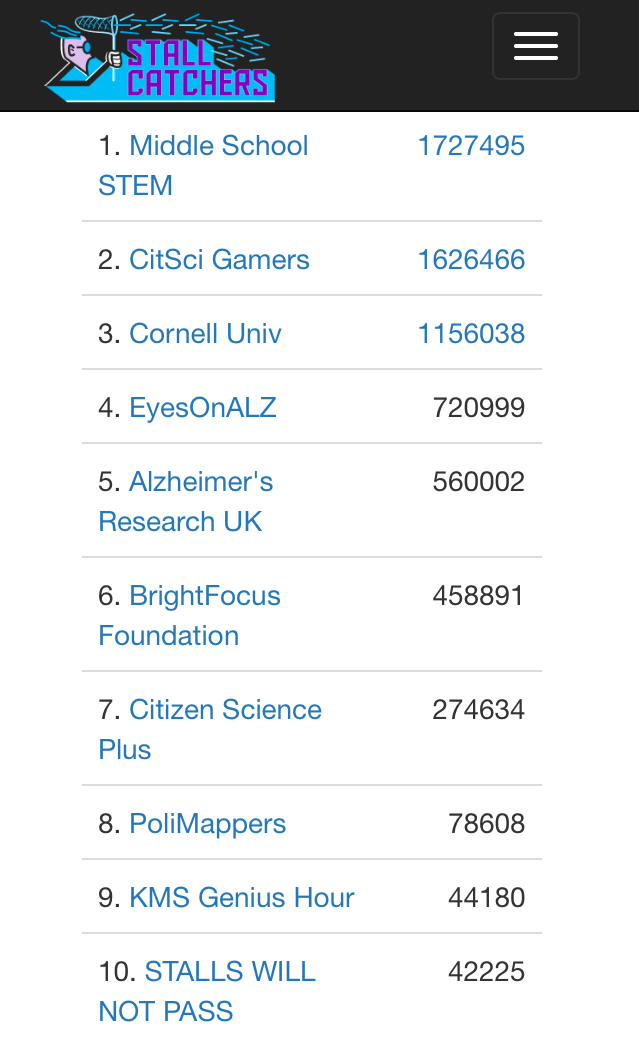 And last but not least...

We've reached 40 thousand vessels!! Yep - 44 761 vessels, to be exact, have been analyzed in the competition so far, of which 21 945 are "real" vessels - the ones pushing us towards our research goal.

Thank you everyone - let's keep crushing ALZ at full speed! Invite everyone you know! 😇

Day 6 is concluded! 24 days to go, and we are making strides in crushing ALZ on Stall Catchers already :) See full results of Day 6 below, and remember... It

Our #CrushALZ competition on Stall Catchers is gaining speed, and at the moment of writing this we are already 6.05% done in solving the research goal. But what does