The Stall Catchers game launched it's first team competition to #CrushALZ one week ago, April 6th, to celebrate the premiere of The Crowd & The Cloud mini-series on citizen science, featuring Stall Catchers & the EyesOnALZ project in Episode 1. 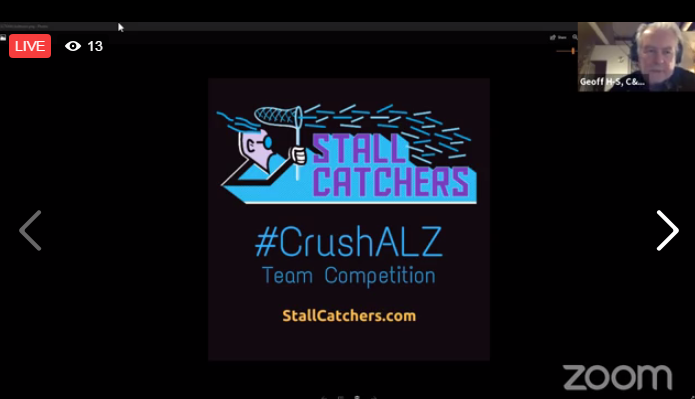 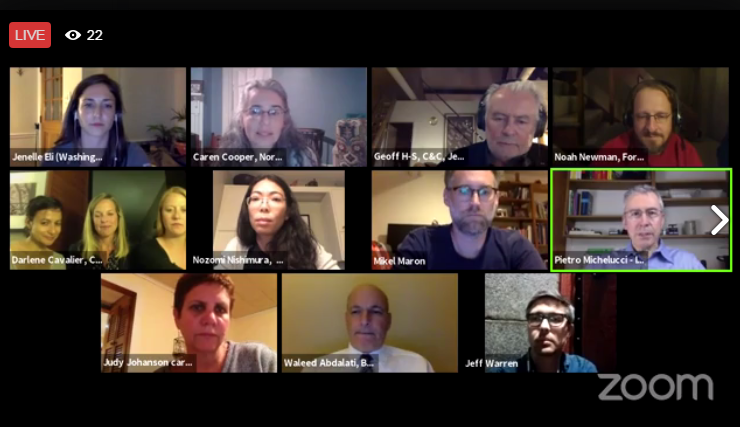 Moments from the #CrushALZ launch during the #CrowdCloudLIVE after-premiere hangout with experts & heroes of Episode 1 of the series.

Since then, #CrushALZ has been joined by 18 teams together harboring 256 "catchers"! While some of these are new joining members, some are from the "old-timer" crowd of more than 4000 players already registered in the game!

During the month-long competition, catchers will help to answer a novel research question at the Schaffer-Nishimura Lab, Cornell University. The question, regarding the spatial relationship between stalls - blood vessels where blood is not flowing - and amyloid plaques, could be an important push towards understanding the role of reduced blood flow in the brain in Alzheimer's disease. Read more about the research goal of the #CrushALZ competition in this blog post.

Get a sneak peek of the lab where research behind Stall Catchers happens & a THANK YOU to Stall Catchers players by Nozomi Nishimura - our biomedical collaborator - herself!

Steady climb towards the research goal 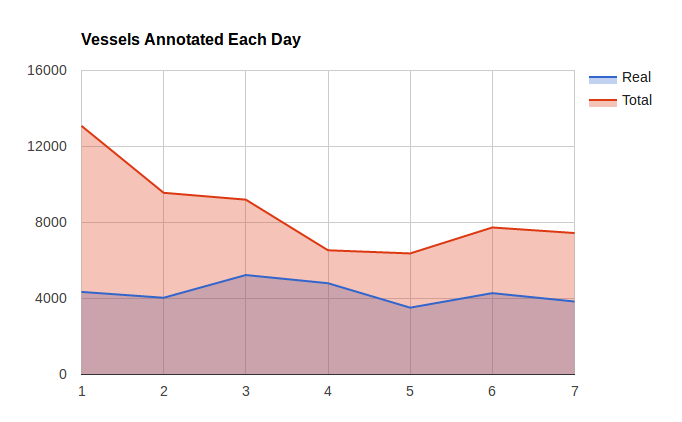 During Day 1 of the #CrushALZ competition, catchers analyzed a record-breaking 13 thousand vessels! The rate of analysis remained high for the rest of the week, with daily total vessels annotated ranging from 6,3 to 9,5 thousand vessels per day. Of these, however, only a proportion were "real" vessels - ones never analyzed by anyone else & relying on the crowd answer to solve. More experienced users get more real vessels, and after the initial influx of new catchers, they quickly caught on, starting to analyze more & more real vessels per day.

Our overall goal of #CrushALZ is carrying out 360 thousand real vessel annotations during the competition month, which would get us closer to answering the research question.

We've been climbing steadily up, but we need a new influx of activity to get to the goal faster! 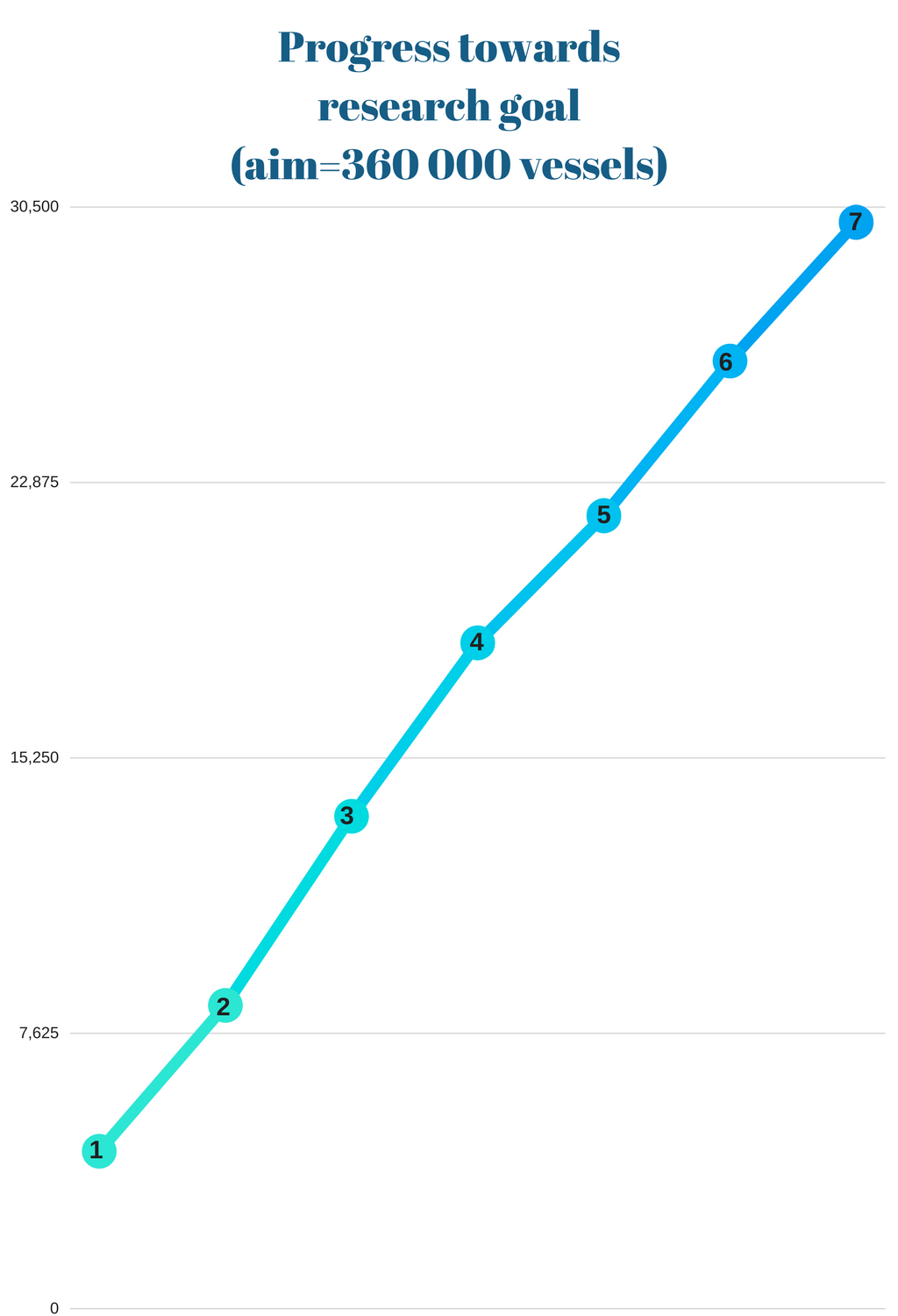 If you would like to help us #CrushALZ with your organization, feel free to set up a team & start catching stalls right away! Teams can climb quickly up the leaderboards, and the daily leaders are featured in the EyesOnALZ blog & channels of partner organizations. Full guidance can be found in this post.

We are amazed to see that our long anticipated Teams (beta) feature has been adopted by as many as 18 teams in just one week time! Not only that, but the teams have been growing every day for the past week. 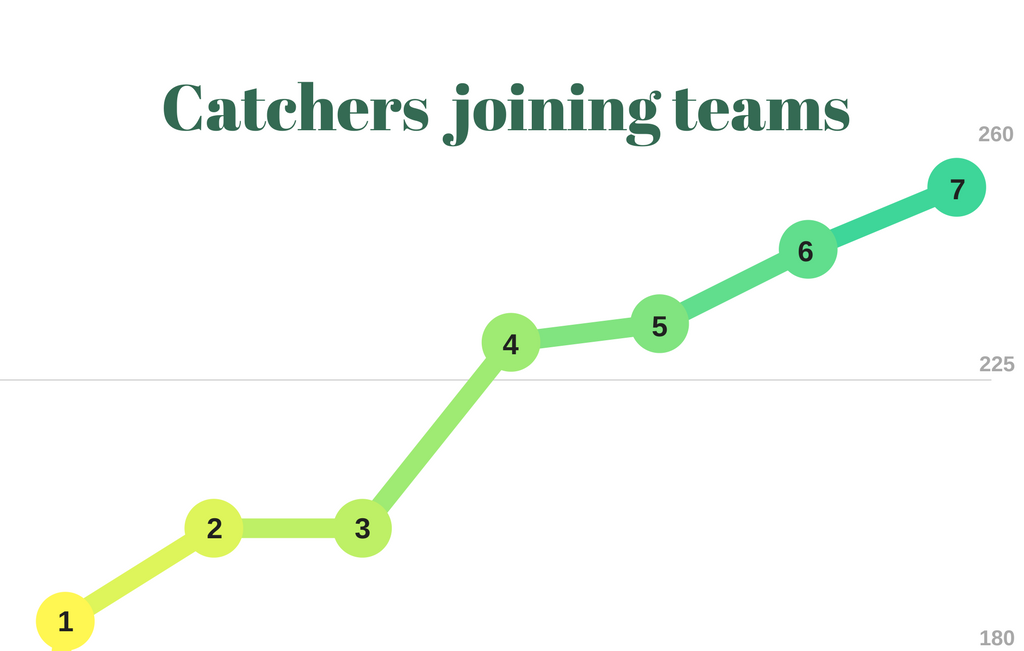 At the end of Week 1, #CrushALZ had gathered 256 team players, and the most amazing of all - almost half of them, 124 players belong to the Middle School STEM team! We are proud that so many school-level catchers chose to fight Alzheimer's with science, and - with their permission - hope to feature a story on the team very soon.

CitSci Gamers team were the absolute leaders during week 1 - a little slow at first, they gained major speed on Day 3 & took the top of the daily leaderboard 5 days in a row! They also stayed on top of the All time leaderboard twice, beaten only by the Middle School STEM team who were able to hold the overall leader title for 3 days. The other high player were Cornel Univ - the team owned by our biomedical collaborators at Cornell University, who were especially active during the first couple of days of the competition.

Here's the final tally of Week 1: 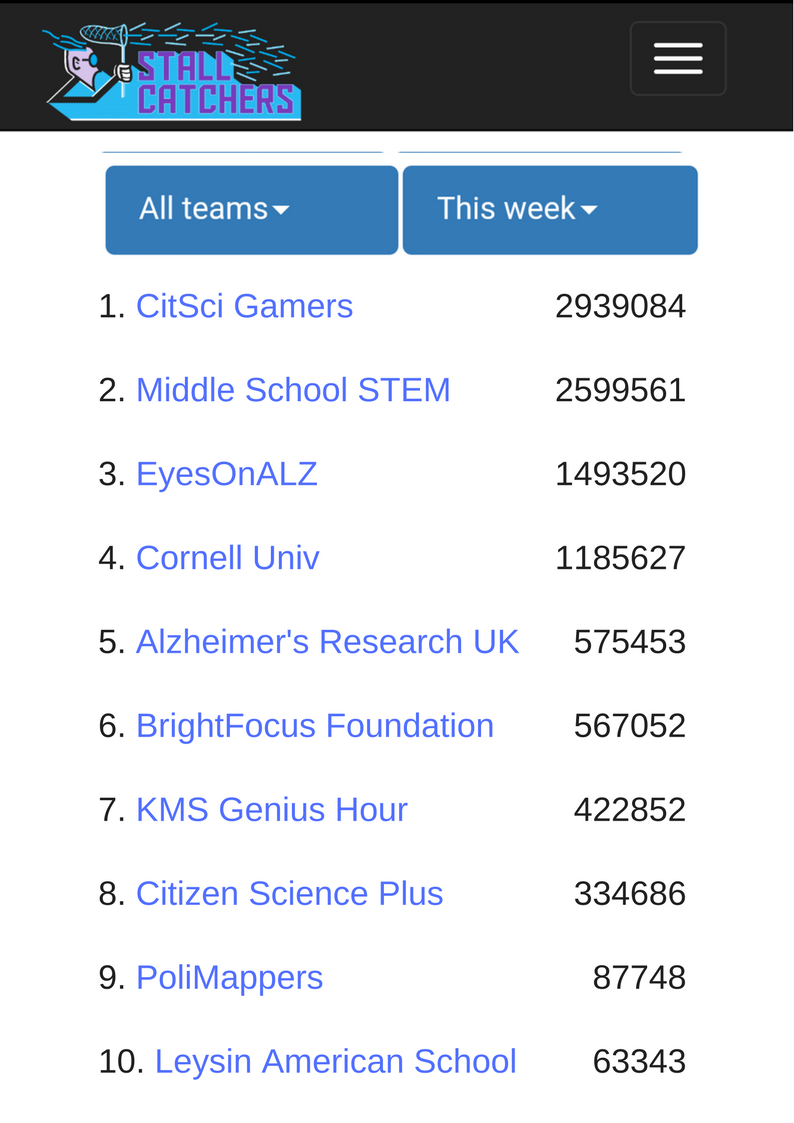 Thank you everyone who contributed to Week 1 - there's still 3 weeks+ to go, and we really need your help to #CrushALZ! Join today.

The first day of #CrushALZ week two has concluded & there's a revolution happening in the daily leaderboard! Read all about it below... If you don't know what the super

Day 7 is over and - guess what - so is Week 1 of the #CrushALZ competition! We'll make this daily report quick & upside down ... 🙃 But only because there's