Megathon. Citizen Science Day 2019. Thousands of catchers turn up to single-handedly complete the amount of research that would have taken months in the lab...

Yep -- we did it! Never before have we done so much work in a single event, and if the "megaton" glitchy blast* wouldn't have hit, we would have totally reached our goal in one hour!!

* If you're curious to know what happened there, scroll down!

We are so sorry for everyone who tried to reach the site during the Megathon "golden hour" and couldn't, or had to deal with a frustratingly slow game, ugh!! But a lot of you continued to spread the word about the effort even when you couldn't play, and we are so grateful for that ♡ ! And, because of the perseverance of you all, we got back on our feet, and recovered beautifully over the extended Megathon weekend! In fact, at the time that we are reporting these results, we had just reached 100% -- dataset analyzed! :) That is also largely thanks to everyone who pitched in today (Monday), since they couldn't contribute during the weekend, including several classrooms at the Dickson County High School, led by their teacher, Adam Taylor. Thanks so much guys -- way to make a difference in a single day (or class!) ♡

We will be looking at your answers in the next few days, and try to determine the preliminary research result concerning hypertension and stalls. In the meantime, please keep going and tell your CitSciDay buddies to do so! :) As next order of business, we will be collecting more crowd answers for validating the dataset, so we can be more confident about the results. And, after that -- there's way more data where these came from! :)

But back to the Megathon.. Here's how we did over the extended Megathon weekend (48 hours, including Australian/Asian mini-Megathon!): 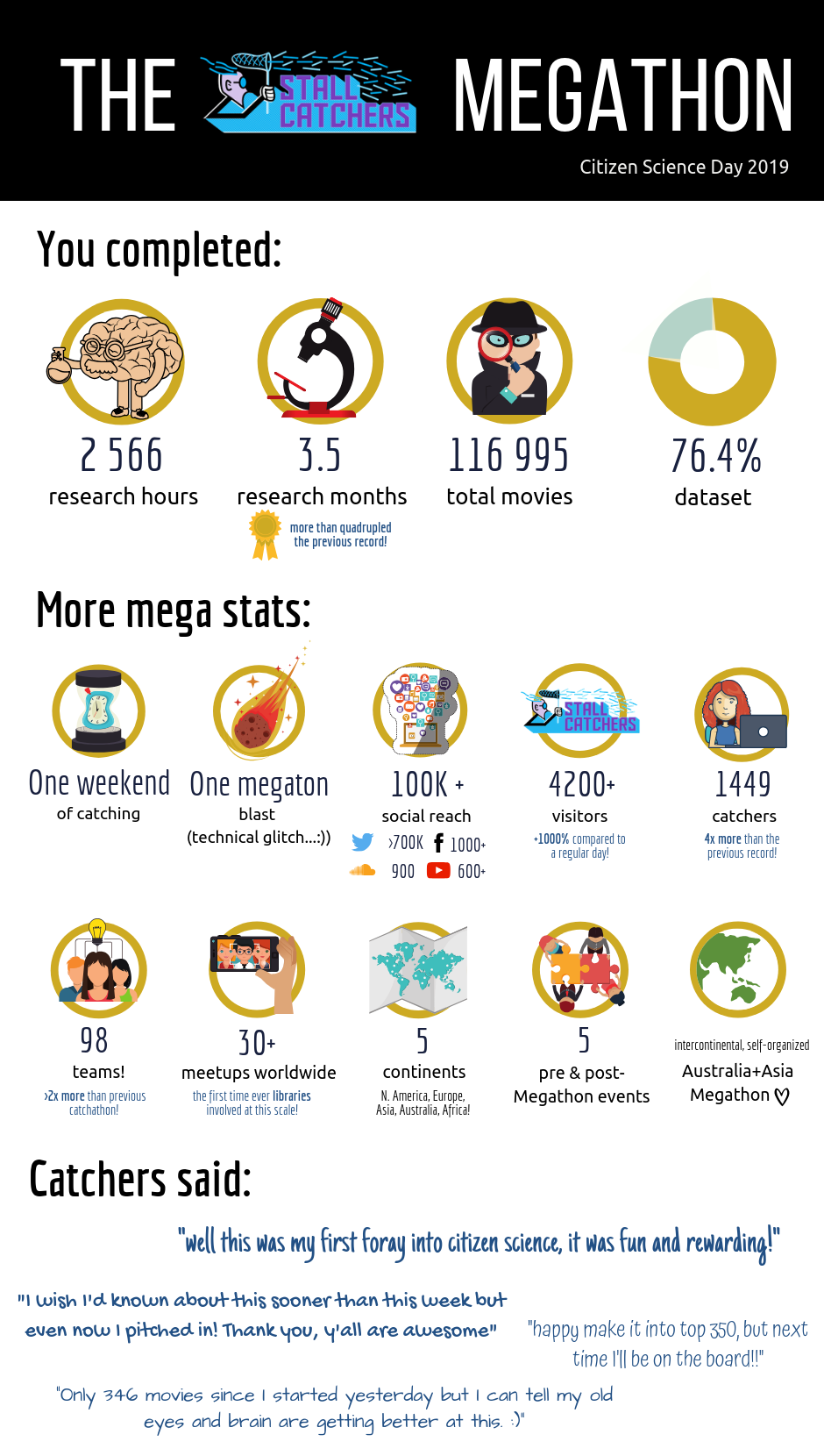 If you took part in the Megathon, here's two more fun things for you to do now:

As you can see, there's been more records broken than we can name! :)) and we were thrilled and humbled by some of the feedback received from new catchers ♡ Looks like there's many super catchers in-the-making in the community now! ;)

Special mention also goes to the rock star citizen science teams from Australian & Asian Citizen Science Associations, for taking initiative and self organizing their own intercontinental Megathon event on their Citizen Science Day -- just hours before it started on the North America / Europe side of the globe :) You guys are the best!!! In the two hours of their event, they were able to complete about 60 hrs of research!!

We agree on timeframe (annoying timezones!) so what if we make a time @CitSciAsia in conjunction with NZ (ping @monica_a_peters @SiobhanLeachman) and have our own pre- #Megathon and get the #citizenscience @eyesonalz & @SciStarter off to a good start?

Our team is called CitSciOz!
The leaderboard is now live for the #Megathon and so is our event on facebook!#CitSciDay2019 https://t.co/MmNlhmbVNj pic.twitter.com/xkiQ7wCnph

Not a bad showing to kick off #Megathon for #CitSciDay2019. Team https://t.co/l0cB4XpB1c ended up at 4th place for today! Will be amazing to see what the total score on the day will be when the rest of world is done. It was fantastic collaboration with @CitSciOZ #CitizenScience pic.twitter.com/zgm9MyBJ7A


Overall, there were more than 30 meetups happening worldwide (we're still counting!!), most of them in libraries!! WOOHOO!! 📚

There were at least 5 pre- and post-Megathon events happening (that we know of!), including the event of the Belleville Citizen Science group, Cherry Blossom Catchers, Catchers at Lituanicon in Lithuania, the aforementioned Australian/Asian Megathon, and the Monday Megathon extension challenge, which helped us complete our goal!!

Students are doing well. Some asked if they could take the laptop with them to lunch to keep working on it. I'll try to get some pics when they get back. #citsci #scicomm #ngsschat

AND... well -- our heads are still spinning from all the Megathon fun (and troubles!), but we are still collecting more Megathon highlights and pictures (please send us yours!), and will surely post more stories, facts and leaderboards to the blog. So keep following the Megathon section! :)

On Saturday, Microsoft Research partnered with @eyesonalz to help advance #Alzheimer's research for #CitSciDay2019. A big thank you to everyone who participated in the Stall Catchers #Megathon! pic.twitter.com/hyWQPRFasQ

Last but not least -- **if you're curious about what happened and what gremlins took down the site during the heat of the event** -- Pietro here to tell you how he investigated it and what he found...

It was our top priority to ensure that Stall Catchers would be able to absorb many new users for the Megathon, and indeed we devoted tremendous effort to that preparation. Alas, "the best laid plans of mice and men often go awry".

We moved our entire platform to Microsoft Azure with the patient and enduring help of the FastTrack team. The good news was that we were able to shift our Web server to an "elastic" infrastructure that can scale out to accommodate 100K users! The bad news is that databases don't scale as easily and so we had to just pick the most powerful database server we could and hope for the best. We didn't realize it, but there was an elastic option for the database, though we might not have had enough time to do that transition.

In the end, two things happened. Our trusty database server held out until we hit 550 catchers. And even though we tested with 1100 simulated users, nothing compares to real users on a system.

Ultimately, we believe that what brought the system to a halt was a process that picks out the next movie for catchers to see. This is actually a fairly taxing process, because we need to look through millions of past annotations to make sure it's a movie the catchers hasn't seen, and pick a movie that needs the most annotations. And every time someone clicks the "next" button, that has to happen.

We believe we can improve the efficiency of how we do this, but ultimately, we need to use an elastic database system to ensure that this doesn't happen again. We just learned that such a system exists as part of Microsoft's Azure platform and we intend to look into that option more closely.

During the one-hour Megathon, something else surprising happened. At the end of one hour, we had collected over 8000 annotations - which is a lot of hard work! However, most of those annotations had been applied to only a small set of vessels. The reason this was a surprise is that we collect data horizontally - in other words, we try to get one annotation for each movie before we go and collect a second sample. So how could this happen?

When we pick a new movie for one of our catchers, we don't check that movie off until they give an answer. Normally, this works out fine. But with so many people playing, in the time it takes one person to answer about a vessel, many other catchers would request a new movie and be assigned the same one. We have since corrected this issue, which is why at the time of this writing, we now have over 4000 sample for each experimental group in the Megathon dataset.

It is remarkable that in this day and age, and with the technology available, that such issues would arise. One would think that such issues of scaling are completely solved problems. But each case is unique and the solutions are not as cut and dry as one might think. We have certainly learned that. But we are grateful and proud of our community for sticking with us as you always have, as we learn from our experience and do our best to adapt to our circumstances. This is, of course, a metaphor of the human condition, and Alzheimer's disease itself.

I was honored to meet Harry Urban during an interview with Lori La Bey's "Alzheimer's Speaks" online radio show. Harry has been living with an Alzheimer's diagnosis for 15 years and his secret to success has been to develop coping mechanisms. Harry was on the show to learn about and respond to Stall Catchers. And what Harry said made very good sense to me. He said "what works for you might not work for me". He figured out a path for himself that was working, and he was sharing his learning with others. Sure Stall Catchers may accelerate a treatment, but research is uncertain, and Harry is living with Alzheimer today.

So I appreciate very deeply what Harry said and I stand in awe of the deep wisdom that exists in the mind of someone who is plagued with Azheimer's disease. And from this I take stock in my own good fortune that, at least in this moment, my mind is sound enough to respond to what we have learned and to adapt Stall Catchers based on our learnings from this Megathon.
Pietro

Thanks again to all of you for making this important work possible, and for bearing with us through the hard times! ♡

Did you think the Megathon fun was over? No such luck! 😛 Those who couldn't join during the weekend, for example Dickson County High School students from Dickson, Tennessee, are doing