Exactly two weeks ago (Oct, 23) one of our dedicated Stall Catchers volunteers, Coralee Burch, ran a stall catching training session at her retirement community, Hawthorne at Leesburg in Florida, USA!

The session was attended by almost 40 seniors of the community, some of whom have been directly affected by Alzheimer's or are living with the disease themselves. 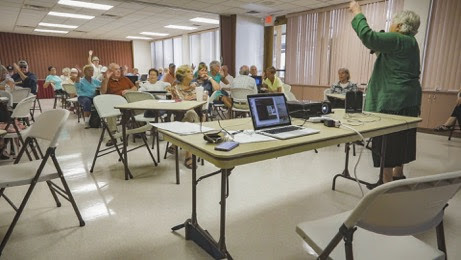 After the initial introduction to our approach, all participants were encouraged to log on & try the game themselves. Coralee here tells you the rest:

I am 73 years old and live part of the year in a senior community, Hawthorne at Leesburg, in Florida. Almost all of my friends there have lost loved ones to Alzheimer or are even suffering from early stages themselves. That is why we targeted my community to be the first to experience a Stall Catchers orientation.

I was particularly enthusiastic to lead this workshop having experienced one at Cornell and finding that it really helped me understand the incredible importance of this project, how it will help their scientists to find a probable cure in our lifetimes (even us old folks) and help give me confidence to be successful and really love doing this game.

Although we put information about the orientation in our newsletter, I found that personal recruiting was the trick, so about a week ahead I started letting people know what it was about and persuading them to come and try it. A production crew, doing a special called "The Crowd & The Cloud" that will appear on PBS in the Spring, arrived on Saturday and took film of the complex, then Sunday interviewed some of our group and recorded the orientation session. 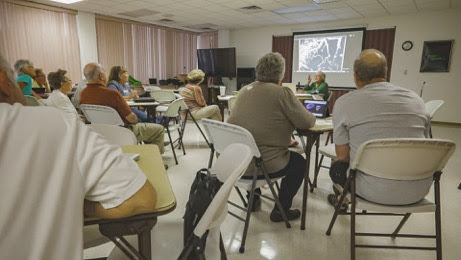 >38 people showed up and filled our large room. They watched slides about the cause of Alzheimer's and how to play the game that will give scientists massive information they need to reduce their research time from up to 30 years down to about 2 years.

Everyone was enthralled with the information, practiced as a group, and finally got on their own computers and iPads and played the game.. Many with surprising success. 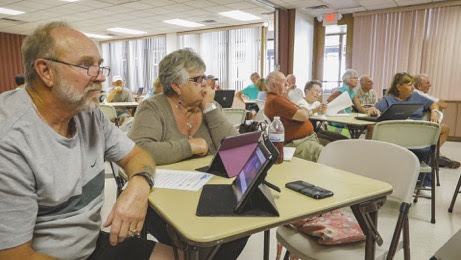 >**I was so impressed that several of the couples who showed up had one partner already diagnosed with Alzheimer's and were excited about the opportunity of helping in their own treatments and futures.**

Because our community is so active many of us will live to (or already are in) their mid eighties, a time when as many as 50% will be likely to be victims of this terrible disease.

There was tremendous excitement among them to be able to impact their futures and know that treatment and a cure would be available in time for them.

By the end of the session many were already succeeding at identifying the flowing or stalled blood in the veins of the brains of mice, knowing that that would give the scientists much needed information. It was fabulous for them to take control of their "golden years" and improve their life outlook.

Afterward many others expressed their excitement, enjoyment of the game, and told me that they were thrilled to be working hard on their "futures". Seniors have the time and desire to make a difference and it gives them a sense of control of their lives. Like the "blind, leading the blind", they will not go down without a battle.

Our biggest thanks go to Coralee for creating this important learning opportunity in her community. And, of course, everyone who showed up to join the battle against Alzheimer's with citizen science! 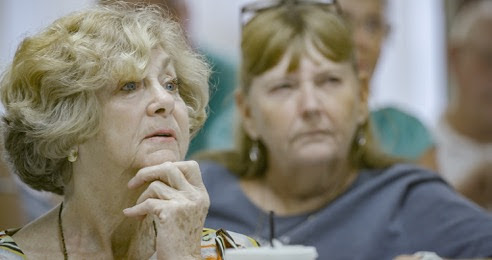 If you would like to run a similar Stall Catchers training session in YOUR retirement center, club, classroom or any other type of community - get in touch with us at info@eyesonalz.com, and we will provide you with all the materials & support neccesary!

The session was filmed and will be featured in the upcoming 4-part documentary about citizen science and crowdsourcing: The Crowd & The Cloud. EyesOnALZ will appear in episode 1, Spring 2017!

November - National Alzheimer's Disease Awareness Month and National Family Caregivers Month is just about halfway through. For us at Stall Catchers it has been a month of new records, as new participants have been coming in to join our growing community! To all

Alice (@penguingalaxy) and me (Egle, @seplute) just got back from the Mozilla Festival, where we got to hang out with the Open Science gang for three days! Friday - getting