Besides being home to the Alzheimer's research lab at Cornell where the Stall Catchers data comes from, downtown Ithaca, New York (USA) also happens to transform each year, for one "Wizarding Weekend" into Diagon Alley from the Harry Potter book series.

This year, Stall Catchers was kindly invited by the Game Changer Movement to share a booth (#216 on this map) at Wizarding Weekend, where 30,000 witches and wizards will converge to shore up their spell casting skills and improve their divination skills.

Not to miss an opportunity to use magic to help find an Alzheimer's cure, we have created a "Hogwarts" league in Stall Catchers with four teams - corresponding to the four wizarding houses of the Hogwarts School of Witchcraft and Wizardry.

Whether you are a newcomer to [Stall Catchers](stall catchers.com) or an old hand, and whether you are in Ithaca for Wizarding Weekend or somewhere else around the world, we encourage you to read the descriptions and join one of these four teams for this week's Harry Potter House Competition! If the magic hat has already assigned you to a house, just click on one of these links to join the right team:

Track the house competition on this realtime leaderboard! 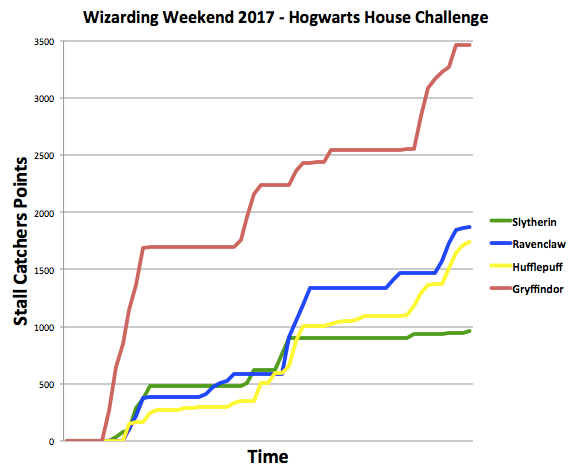 If you're not a Harry Potter fan, you might want to read this blog post to see what the fuss is all about! (Since we don't track the point competition

We'll be in London again this weekend, for the Mozilla Festival 2017 ! On Friday, Oct 27th, we're participating in the MozFest Science Fair, where Financial Times will be filming a